On This Page
Information On The Bethany Area
Browse Our Site
The majority of issues in Bethany were related to skunks and raccoons. These problems were typically concentrated in areas surrounding Eldon Lyon Park and Lake Overholser. 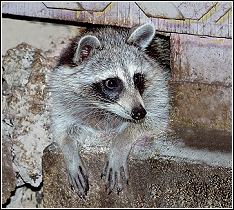 A raccoon similar to those
that sometimes invade homes and
buildings in the Bethany area.
Many people try to perform do-it-yourself wildlife control and animal control and will brag that they relocate their skunks, opossum and raccoons at Eldon Park and by the lake. Consequently, the people closer to these areas should certainly understand that their problem and wildlife population may be worse than they initially thought. People relocating their own animals illegally in these areas causes Bethany residents a number of problems. In addition to problems created by your neighbors, you also have a large wildlife refuge right next to the airport which funnels more skunk, raccoon, opossum and snake issues right to your back door.
Common Wildlife Control
Problems In The Area
Skunks
Raccoons