Page Contents
Information On The Broken Arrow Area
Browse Our Site
Broken Arrow, for it's size, has fewer wildlife and animal control complaints than other towns in Oklahoma. Squirrel, beaver, snake, muskrat, ground hog, and raccoon removal requests are the most common requests from area residents and businesses.
Broken Arrow's more established neighborhoods with more tree cover do create more habitats for squirrels, snakes and raccoons. Eight years ago, Broken Arrow appeared to have a lot of skunk issues at commercial properties, but this has drastically decreased in recent years. 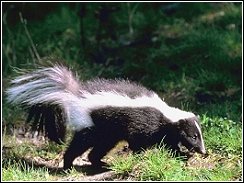 A skunk similar to those
which created problems for
Broken Arrow commercial properties.
Because Broken Arrow animal control no longer assists the public with nuisance wildlife control issues, only domestic animals, we spent time in Broken Arrow frequently, but not as much as other Oklahoma towns the same size.
Many neighborhood associations hired The Wildlife Whisperer when other companies failed to trap the beavers chewing down trees and damming up water features. Not only could we remove and relocate the beavers, but we were the only people in that area who had relocation sites who wanted beavers to restore their wetlands.
Broken Arrow is starting to have a lot more ground hogs move into the city limits. We loved working with these fun animals and had simple, long term solutions.
Common Wildlife Control
Problems In The Area
Beavers
Groundhogs
Squirrels
Snakes
Raccoons