Groundhogs are not a problem for Florida residents, however, we have worked extensively with them in the past in other areas of the country and we wanted to share that information in case it might be helpful. If you are in Southwest Florida, and having trouble with a burrowing animal, but you're not sure what it is, please give us a call, we might be able to help.
The groundhog is a large rodent which is also referred to as a whistle pig or a woodchuck in different parts of the U.S. There are a lot of ineffective, cruel methods that are used across the country to get rid of groundhogs, but we have humane solutions that do not involve fumigants, traps, killing or snares. The Wildlife Whisperer's humane methods work and we have not failed to remedy a groundhog challenge yet to date.
On This Page
Solutions To Groundhog Problems
Groundhog Facts & Information
Browse Our Site
Cape Coral
Fort Myers, Pine Island
& Surrounding Areas
239-900-6411
Coral Gables, Miami
& Southeast Florida
305-306-1207
Contact Info

Groundhogs (marmota monax), like so many other animals, are typically just killed or trapped and relocated by homeowners and wildlife professionals. The most popular method for groundhog control is to use fumigants which kill them in their dens. Live cage trapping groundhogs and relocating woodchucks is popular, as well as the use of body crushing conibear style kill traps and foothold traps. Snares are not typically used on whistle pigs because of the resulting tug-of-war to pull them back out of their den once in a snare.

The above methods are not only inhumane, but they are unnecessary.

Groundhogs, also called woodchucks and whistle pigs, are one of the easiest animals for us to humanely get rid of in most cases.

We know exactly how to manipulate mothers into moving their young elsewhere so the denning area can be destroyed and the necessary repairs set in motion.

How do you remove groundhogs and control for them in the future?

One of our favorite methods for making a dirt denning animal move on is to totally destroy the den, including the walls, forcing the animal to move on. The problem with destroying a groundhog den is that it can be an incredible amount of work without a backhoe.

Some Nuisance Wildlife Control Operators (NWCOs) report destroying a groundhog denning area and having the animal make another 20' away from the destroyed tunnels, but they have also admitted to not being positive that they destroyed the entire system.

Fences are good at keeping woodchucks out of a particular area, but groundhogs are great climbers so a low voltage line at the bottom and/or top of the fence is sometimes needed. To prevent digging right under a fence, a hardware cloth bury may be needed.

If you do not feel like digging all day long to do a hardware cloth bury, the Dig Defence Animal Control Commercial Grade will work, but you still must dig a 3" wide by 12" deep trench in order to install two sections of the product to give you 30" deep protection for more aggressive diggers. 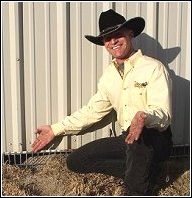 If your wildlife control problem involves woodchucks eating the plants in your flower bed or garden, a low voltage wire 4"-6" above the ground may keep them from causing damage. In some instances, an electric wire alone, placed 4-5" (10 to 13 cm) above the ground, has deterred woodchucks from entering gardens.

When woodchucks have started living under a shed, a hardware cloth bury and/or Dig Defence® will be needed for a long term solution. 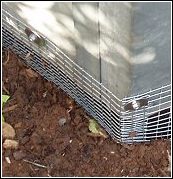 The groundhog is a rodent which is also referred to as a whistle pig or a woodchuck in different parts of the U.S. Woodchucks are usually a grizzled brownish gray color, but, just like squirrels, there are white and black ones occasionally. The male and female look a lot alike, but the male will typically be slightly larger in size, weighing in around 4-15 pounds and are 16-20" with a 4"-7" tail, chunky body, short legs and incredible curved claws designed for digging burrows, which is the typical reason for people requesting groundhog removals. 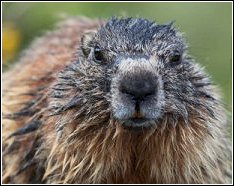 Like all rodents, woodchucks have nice sized chiseled teeth. Groundhogs actually have two layers of fur with their guard hairs being a different color, making it look like they went to the local salon and had their fur frosted.

Groundhogs mostly eat vegetation, grubs and insects and get their water mainly through plants rather than water sources.

Woodchucks enter into a true hibernation, starting in late fall until February or March. They often dig a separate burrow below the frost line for torpor in a wooded area. Their torpor can vary start, stop and duration times, depending where they are at in the U.S., but males usually end hibernation before the females and young do.

Woodchucks usually move around during daylight hours and complaints about the hit our phone lines in early spring when they exit torpor and are hungry, in July when the young go off on their own and early fall because they are trying to gorge themselves full of food for the winter.

When groundhogs are not eating, they love to sunbathe, in a manner similar to humans, which is typically when people find out that they have groundhogs on their property. Woodchucks have been seen keeping their bodies as flat as they could on top of a rock in the sun in order to better warm their bodies.

Even though woodchucks look fat and lazy, they can move rather quickly, they are great swimmers and climbers. Groundhogs are rather territorial and will not hesitate to protect their territory with their teeth and claws.

Male groundhogs may travel for long distances in search of a mate. Woodchucks breed around March and April and after a gestation period of 32 days, a litter of 2 to 6 young arrive each year. Both parents typically stay in the burrow together awaiting birth. Their young are born hairless and blind, they are fully weaned by late Spring and go out on their own after 5-6 weeks. Young woodchucks like the one seen in the photo below often occupy abandoned burrows. Groundhogs can breed in their first year of life, but most start after their first year.

In the wild, where groundhogs belong, they can live up to 2-6 years, whereas in captivity, groundhogs have lived 9-14 years.

Groundhogs are incredible at digging burrows with their curved claws. With 2-5 entry and exit points, their elaborate borrow systems can displace hundreds of pounds of dirt to make up to 50' of tunnels down to 5' below the surface. Visible den entry holes are about 5" - 12" inches in diameter with a lot of dug out dirt at the entrance.

The groundhog prefers to set up their homes in open country and around the edges of woodlands. Similar to a fox den, if you see flies around the entry point, it is likely an active den. Woodchucks replace their nesting materials quite often, and like to keep a "clean house". Many woodchuck trappers report that woodchucks or groundhogs smell like skunk because skunks like to raid woodchuck dens. Young groundhogs frequently move into abandoned dens or burrows.

Several groundhogs may live in the same burrow. Similar to some mud bank beaver tunnels, these elaborate tunnels can pose a serious threat to farm machinery, cattle, horses, humans, vehicles and building foundations.

Woodchucks do not stray too far away from their entry holes during the daytime. They typically stay within 50' to 150' from a hole.

As seen in the photo below, it is common to see one or more standing erect on their rear legs standing guard, looking for danger. When an intruder appears, they use a high pitched whistle to warn the rest of the colony; this is why they are sometimes called “whistle-pigs”. 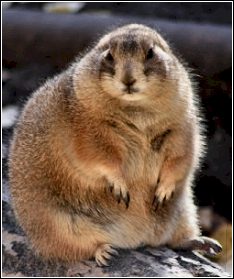 After their whistle, they make a low, quick "phew" sound and a fast warble that sounds like "tchuck, tchuck".

Squealing, chattering, low barks and tooth clicking or grinding sounds may be made when the animals are fighting or injured and when excited, their tail hairs stand straight up. Whistle Pigs may charge at a property owner to keep them away from a burrow.