Page Contents
Information On The Del City Area
Browse Our Site
Most wildlife issues in the Del City area are created by squirrels and raccoons getting into attics. Because there are quite a few rental properties in Del City and absentee landlords, we assisted with squirrels and raccoons in the attic rather frequently. In the neighborhoods around Tinker Gold Golf Course and Tinker Air Force Base. We received a lot of calls there for snakes, raccoons, pest control issues, and skunks too. 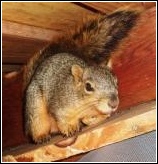 A squirrel discovered in a attic
during a Wildlife Whisperer call.
Many people in Del City have swimming pool and ponds and due to the drainage areas leading through neighborhoods, it creates more places for skunks, raccoons and snakes to investigate. Areas closer to Sooner Park also experience a lot of stray cats, skunks and raccoons because people brag about illegally relocating their own do-it-yourself wildlife control animals there.
Common Wildlife Control
Problems In The Area
Squirrels
Raccoons
Snakes
Skunks
Pest Control