The term "black panther" is not a term that in itself represents a specific species of "big cat". Rather the term is used in general to describe any large predatory cat black in color characterized by an excess of the dark pigment melanin. It is the melanin that results in an overall black coat and color that gives these cats their distinctive appearance.

It is believed that black panthers do not exist in the wild anywhere in the United States, and tales to the contrary are often regarded as folklore or attributed to a mistaken identity. However, individuals who believe they have had encounters with them will tell you otherwise.

If you believe you have a problem with a panther, any panther, it is best to report the sighting and call a wildlife control professional for help.

Jaguars and leopards are actually different species with leopards being smaller, slighter built, more agile and graceful. The stockier, larger Jaguar can be twice the size of a leopard and grow to as much as three hundred pounds in some areas of the world. Both big cats have spots, also called rosettes, dispersed throughout their coloration, but the shape, size and outline of these spots will differ somewhat between the two species.

The Jaguar usually has a dot in the middle of his rosettes whereas the Leopard does not. Jaguars and Leopards can be yellow with black outlined spots and markings or they can appear mostly black in color. The leopard like spot patterns of a black panther can be so close in color to black themselves that they are not always easily distinguishable, making them sometimes appear solid black in color, particularly from a distance.

The body length of a Black Jaguar is between four to six feet and its tail is about thirty inches. There is also a smaller panther like cat known as a Jaguarundi found in Mexico and South America. It is much smaller and different in appearance than what one might typically refer to as a panther, but it may often be the culprit of so called black panther sightings reported throughout the southwestern and south central United States. It is also possible, yet rare, to run across Bobcats with a rare black coloration that could be mistaken by some as a black panther. A large black panther found in the United States, Mexico, Central or South America that is not a cougar, mountain lion or Jaguarundi would likely be a Black Jaguar. In other areas of the world such as Africa, Malaysia, India or Southeast Asia you would likely be describing a black panther leopard.

Panthers tend to be elusive, solitary and often but not always nocturnal. They are most active at sunrise and sunset. Jaguars communicate with a loud roar and various vocal sounds including deep, raspy, coughing grunts. They use scent to mark their territory, a territory that can be as large as 150 square miles, but are roaming cats and tend to move on after a few months. The Jaguar, like the one below, may be stockier than leopards, but they are still very agile, fast and adept at climbing trees.

Both jaguars and leopards stalk their prey silently, preferably undercover and then pounce unexpectedly at the last minute. But they differ a bit when it comes to "the kill". Leopards quickly kill their victims with a bite to the throat, whereas Jaguars usually kill by biting through the temporal bones of the skull - with an ability to kill their victim instantly in one bite.

It is believed that most panthers prefer to avoid people but humans may occasionally be targeted as prey, particularly during times when other food sources are scarce. White tail deer, cattle, armadillos, wild hogs, raccoons, even alligators can all be part of a typical Jaguar's diet. The habitat of an American black jaguar can vary and can include anything from the wet swamps of Florida to the arid scrub of New Mexico. But in general they like to live close to a water source such as a river. Jaguars in North America tend to be at the top of the food chain with humans being their only rivals for food or territory. Jaguars and leopards are just two species of big cats that can "roar" - the other two being lions and tigers.

Sightings Across The United States

In general, black jaguar, black leopard and other black panther sightings have been reported in various areas across the United States, including but not limited to Arizona, New Mexico, Southern California, Texas, Oklahoma, Kansas, Nebraska, Kentucky and Mississippi.

State wildlife officials say there is no proof that a black jaguar or panther exists in Oklahoma. A possible reason for the lack of official recognition by the state - that the black panther exists in Oklahoma, is that if state entities acknowledged their presence, they would have to provide habitat for them, which would be an unpopular and expensive solution. Another reason may simply be a hesitance to create panic or unnecessary fears among residents. Just the same, plenty of Oklahomans will swear they've seen one. These sightings may be something other than an actual jaguars such as a cougar or jaguarundi, but they may also be quite real.

Ned Bruha has not directly seen a black panther in the wild in Oklahoma, however, he has seen convincing evidence and photos of a black jaguar or leopard in a hilly rural area about 30 miles NW of Tulsa.

The below photo of the injured dog and the large panther next to the logs seen to its right, were taken in this area and several property owners in the region have reported similar sightings for several years in a row. 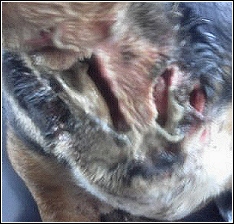 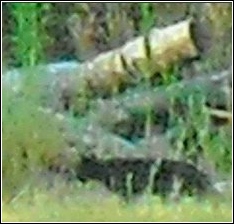 The above dog was attacked by the big cat photographed northwest of Tulsa, Oklahoma. The big black cat mother and two younger kittens were at the property preying on young dogs in a fenced in area immediately next to a house. Although this photo and others were taken from about 75 yards away, you can still make out black spots on the black fur. The Skunk Whisperer® personally visited the location and the height of the animal was confirmed by measuring the logs and weeds seen in the photos. The top of the cat's back was estimated to be 28"-32" from the ground.

Assuming black jaguars do exist in Oklahoma, their origin would be the first question that comes to mind. There are three possibilities. They may have originated as one time pets or captive animals that escaped or were set free by their owners. They may have at one time been indigenous to Oklahoma hundreds of years ago and eventually eradicated to near extinction by hunting, the environment or disease. A few may have survived into modern times or they may have simply migrated into the state from other, even distant locations where they are known to currently exist. Jaguars are migratory cats - always on the move and it would be easy for them to travel the well forested river ways that travel through Texas and northward from there. As a matter of fact, a panther is quite stealthy and could easily travel these remote river ways 25 to 50 miles in one day undetected in the dark of night.

We believe that migration is probably the most likely scenario of the three.

When it comes to safety, knowledge can be a very beneficial tool. We have a lot of information for you on panther control, prevention and safety that can also be applied to co-existing with cougars. 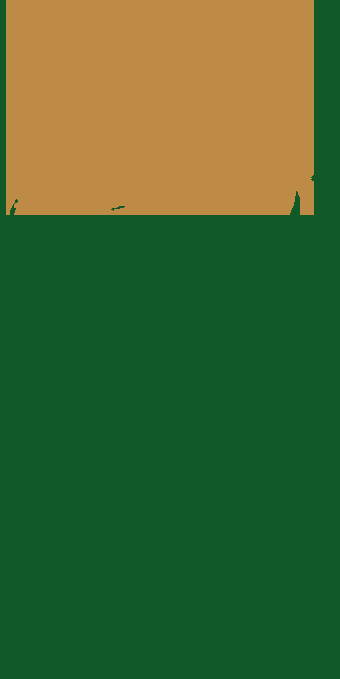