People often want to know if rat poison and anti-freeze can be used to kill skunks, raccoons and other wildlife. They wonder if fox urine, moth balls and other popular repellents can help keep squirrels, opossum and wild critters away. We've even had individuals ask us why their dog's feces is turquoise. Some of the answers may not be what you want to hear, but we have them for you just the same, because knowing the truth can be critical when it comes to solving your wildlife problems safely, humanely and effectively.
On This Page
Questions And Answers
Browse Our Site
Cape Coral
Fort Myers, Pine Island
& Surrounding Areas
239-900-6411
Coral Gables, Miami
& Southeast Florida
305-306-1207
Contact Info

Poisons and repellents top the list when it comes to wildlife control questions that homeowners and businesses are looking for answers to...

Will Rat Poison Kill a Raccoon? ... A Skunk?

Rat poison sometimes kills raccoons, skunks, squirrels and other animals and wildlife, including dogs, hawks and eagles that die from secondary poisoning. Note the photo of the raccoon feces we found in an attic - part of it is turquoise, which indicates that the raccoon ate the poison. 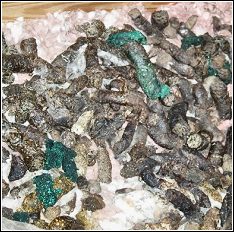 Many people want to know why their dogs' feces is turquoise... in most cases it ends up being because the dog ate rat poison that had been left out to target nuisance wildlife. However, in many cases, targeted wildlife is too smart to eat all of the poison - or even enough for it to kill them.

Can Anti Freeze Be Used To Kill a Raccoon? ... A Skunk?

Anti freeze sometimes kills raccoons, skunks, squirrels and other animals. In the photo below, a homeowner attempted to perform do it yourself raccoon removal using antifreeze and rat poison. One of our team professionals was called in to remove the remaining raccoons in the attic and exclude them properly to prevent future issues.

So, what happens if the anti-freeze or rat poison does not kill the skunk or raccoon? Exactly where does it die? Skunks and raccoons do not typically go out in the middle of the yard to die in a convenient place for you. If it is currently living under your house or in your attic, the animal will die there in most cases, or fall behind a wall - we know - we get many calls to remove dead poisoned animals. Cutting holes in walls, roofs, and ceilings to remove dead wildlife can become very expensive, very quickly.

Note the photo below of the dead mouse that we had to remove from a client's house. Because of the smell that filled the entire house, this one dead mouse forced the homeowners to move into a hotel. 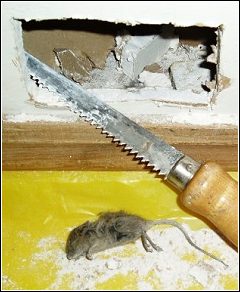 Hotel fees, drywall repair, painting, deodorizing, dead pets... how much did that rat poison to the remove the mouse really cost? How much worse would it be if it was a larger animal such as a skunk, squirrel or raccoon?

We have better solutions than poisons and anti-freeze.

What If I Accidentally Kill My Neighbor's Pet?

It is important to know that there is more at risk than money or sentiment - it is against the law to accidentally kill a pet, neighbor's pet, or other animals with rat poison, antifreeze, gopher strychnine or any other poison that is not intended for that animal. In many cases, it is a felony. 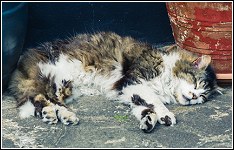 Antifreeze companies have recently agreed to add a bittering agent into all antifreeze so animals will no longer be attracted to it, including wildlife.

Do Moth Balls, Fox Urine, Or Other Repellents Work?

Shake Away, moth balls, mountain lion feces, and coyote urine are just a few of the many popular repellents out there that people attempt to use to get rid of squirrels, raccoons, opossums or skunks. On occasion they may appear to work, but it is most likely a coincidence.

One homeowner heard squirrels in the attic. The fox urine product they bought did not scare the squirrels out - it just quieted them down, so the homeowner nailed a board over the hole.

Soon after a dead animal smell started coming from the attic and our company was called in to investigate.

They did get rid of their squirrels - by accidentally trapping them into the attic and killing them. After a portion of a wall and ceiling were removed, the dead squirrels were taken out, the area treated for dead animal smells, the drywall repaired, texturized, painted and so forth... how much did that do it yourself fox urine repellant really cost that client? 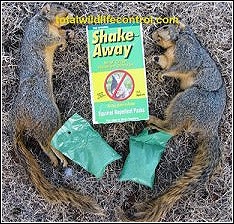